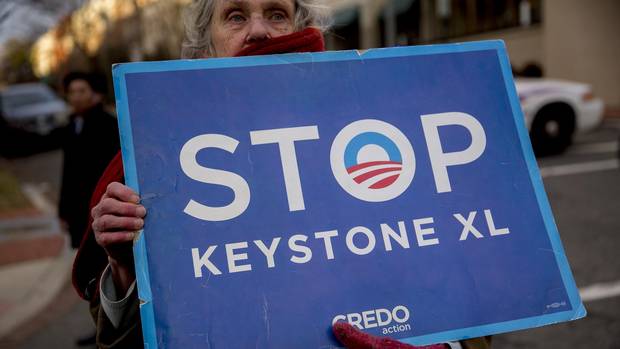 Canada’s energy future remains deeply entwined with that of the United States, which is now virtually our only customer for exports of crude oil, natural gas and electricity, and which has under President Barack Obama played a leadership role on international climate change action.

As a result of Mr. Trump’s upset, the prospect for a continental energy policy will look very different from this past year, since the Liberals came to power. The Republican standard-bearer has dismissed concerns about climate change, pledged to slash regulations that impede the production and use of fossil fuels, and is unlikely to stand in the way of new pipelines that would bring oil-sands crude from Canada to the refinery hub in the U.S. Gulf Coast.

Mr. Trump favoured the Keystone XL pipeline that Mr. Obama turned down, and has said he will invite Calgary-based TransCanada Corp. to refile its application. However, the real estate developer said he would want a better deal for the U.S. including wanting “a piece” of the pipeline project for the U.S., though he has never suggested how that stake would be achieved.

If, as he has promised, Mr. Trump rolls back his predecessor’s climate commitments, Canada will face tough competitiveness questions as Ottawa and the provinces pursue plans to increase carbon prices in the coming years.

“With Trump, [energy policy] is a black box because he has not offered detailed plans,” said Colin Robertson, vice-president of the Ottawa-based Canadian Global Affairs Institute.

Renewable energy advocates insist that, regardless of the outcome of the presidential election, the U.S. will continue to see a surge in clean-energy investment as U.S. states pursue their own standards and policies that drive adoption of increasingly competitive wind and solar power.

But Mr. Trump would likely hurt the renewable energy sector because he would kill off Mr. Obama’s clean-power plan, which would encourage states to adopt clean power over coal-fired electricity. He will likely end a key renewable-energy tax credit when it comes up for extension in 2019, noted Divya Reddy, an analyst with Washington-based political risk firm Eurasia Group.

While the businessman diverged from Republican orthodoxy in areas such as trade and foreign affairs, he has echoed the party’s long-standing support for unfettered oil and gas development.

His chief energy adviser is Kevin Cramer, a North Dakota congressman and climate-change skeptic whom Ms. Reddy describes as “perhaps the most outspoken advocate for the U.S. oil and gas industry in Congress.”

Mr. Trump has committed to roll back regulations that hamper the industry. While he has not been specific, that may well include Obama administration plans to cut methane emissions from oil and gas sector by up 45 per cent – a joint Canada-U.S. commitment was made when Mr. Trudeau visited Washington in March.

Climate negotiators are gathering this week in Morocco for the annual United Nations summit and will have to assess how Mr. Trump’s victory will affect the Paris agreement reached a year ago.

He has threatened to walk away from the deal, which Mr. Obama ratified last month by executive order.

There are several ways in which Mr. Trump could undermine the Paris accord, which aims to limit the rise in average global temperatures to less than 2 degrees above pre-industrial levels. He can simply ignore U.S. commitments to reduce emissions, and to provide billions of dollars in aid to developing countries.

The surprise victory by Mr. Trump could force the federal and provincial governments in Canada to reconsider climate policies that will disadvantage energy producers here and drive up costs for manufacturers, said Laura Dawson, director of Canada Institute at Washington’s Wilson Center a non-partisan think tank.

“It may force Canada to backtrack on some of its initiatives that would put Canada too far out ahead as an outlier,” she said. “The Trudeau government was trying to go where the puck was going under an Obama White House but that puck might stop altogether under Trump, or it might turn into a basketball.”