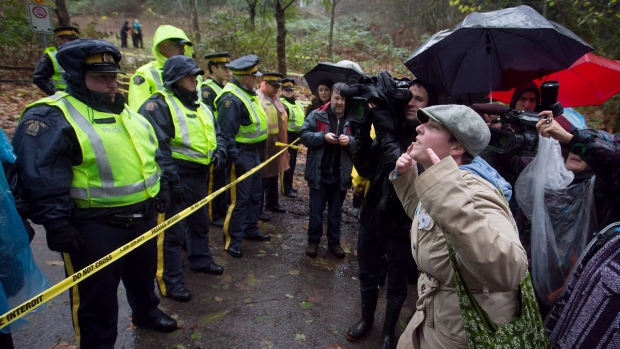 It is never easy to divine the direction of government.

But the federal ministerial panel touring British Columbia to elicit sentiment on the Trans Mountain pipeline expansion by Kinder Morgan must surely be there to find a way for Justin Trudeau to say yes to it.

Which is not to say the fix is in, only that some sort of fix is necessary. The panel is here to listen, even if there is nothing new to hear, then design the art of the possible, perhaps what was in the cards all along.

Through no fault of anyone but itself, the new federal government arrived with more commitments than it could keep, including those on the environment – long-term promises bound to collide with short-term priorities. This is not unusual when it comes to the overlay of policy on populist or pragmatic governance in its early days, but this is a truly tight bind – a national economic argument book-ended by local and global environmental ones.

To summon a recent vivid image of our prime minister, he has to come out of the cave and put on his shirt. He has been coy/mum/duct-taped for good reason. It is not easy at the moment for any public figure – outside of the Albertan ones – to back a pipeline that will always serve to increase the spill risk in one of the country’s treasured places. Argue all you want from Ottawa that B.C. benefits from Canada, that we were settled here for our port and not our driving distance to Whistler, and that Alberta has to get its energy to the world or we will be hardly deserving of G7 status, but the Burrard Inlet is not in your backyard.

That said, a decision to not proceed is a repudiation of the National Energy Board, the credibility of the 157 conditions it placed on its approval of the project, and the structure that Parliament conferred decades ago to ensure sufficient regulation of the energy sector.

Truth is, too, the deteriorated Albertan economy is unlikely to be helped any time soon by rising oil prices. The Organization of the Petroleum Exporting Countries appears prepared to keep pumping – speculation on a freeze in production at its meeting next month is only that – and global demand is weak despite European and Asian economic improvements. Diluted bitumen shipment by rail to the coast is more expensive.

Two matters of realpolitik intervene, too. One would think Trudeau would rather hold his nose and help Christy Clark than John Horgan on the eve of a provincial election; if he is going to help any NDP leader, it is in providing an overdue gift to Alberta’s Rachel Notley over the likes of Jason Kenney as the former Harper minister tries to unite the provincial right.

If Trudeau delivers something, anything, politically, Kinder Morgan might find itself delivering a new line into Burnaby from Alberta – not so much because of the project’s positive attributes, but because it has fewer negative ones than the court-clobbered Northern Gateway proposal or the sprawling, generation-away Energy East scheme.

It would be a go-ahead in part because others can’t go ahead. Not exactly a moral victory, nor a Pyrrhic one, but something in between for Kinder Morgan. And for one of the first but certainly not one of the last times, some traded currency for Justin Trudeau – something that cannot help but stick to him and cannot help but reveal what kind of prime minister he is prepared to be.

Kirk LaPointe is Business in Vancouver’s vice-president of audience and business development.