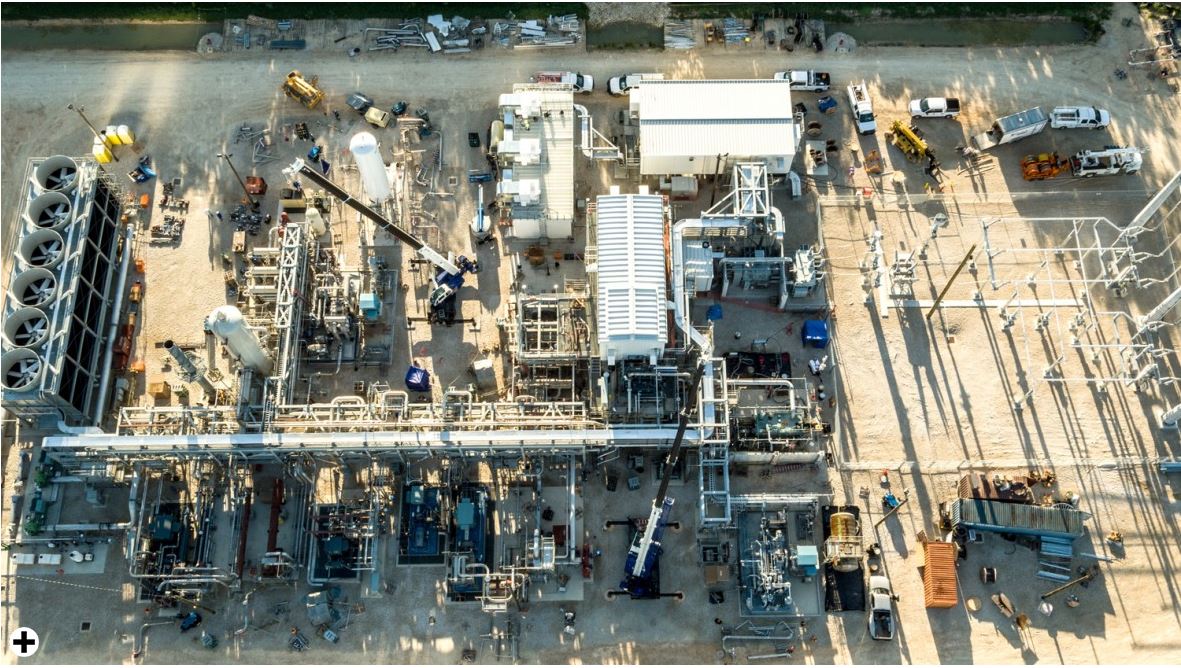 On a small lot between Houston and the Gulf Coast, in an industrial zone packed with petrochemical factories and gas pipelines, a little-known company is finalizing construction of a demonstration power plant that could represent a genuine energy breakthrough.

On a small lot between Houston and the Gulf Coast, in an industrial zone packed with petrochemical factories and gas pipelines, a little-known company is finalizing construction of a demonstration power plant that could represent a genuine energy breakthrough.

If it works as expected, Net Power’s $140 million, 50-megawatt natural gas plant will capture effectively all of the carbon dioxide it produces, without significantly higher costs, in part by relying on the greenhouse gas itself to crank the turbine that generates electricity. The technology could enable a new generation of plants that provide clean power, without the development risks of nuclear (see “Meltdown of Toshiba’s Nuclear Business Dooms New Construction in the U.S.”), the geographic restrictions of hydroelectric, or the intermittency issues of solar and wind. Crucially, future plants of this type could also rely on the nation’s abundant supply of cheap natural gas.

“If it plays out as advertised, it could be an actual game changer,” says Jesse Jenkins, a researcher at the MIT Energy Initiative.

Of course, the road to carbon capture is littered with far more failures than successes, including the Southern Company’s recently abandonedKemper multibillion-dollar “clean coal” effort in Mississippi. So until Net Power is up and running, it’ll be impossible to say whether it can really operate as efficiently, cheaply, and reliably as hoped. But the early major test is fast approaching, with “first fire” scheduled for late November or early December. (The area around the site has sustained flooding as a result of Hurricane Harvey, but as of Tuesday, the facility itself has drained as designed and remains undamaged.)

Most coal or natural gas plants work by burning the fossil fuels to convert water into steam, which turns the turbine that generates electricity. Excess heat and greenhouse gases waft away as by-products of the process. Most attempts at carbon capture to date have bolted a scrubbing step onto the back end of the system, which adds costs by definition.

Net Power’s maze of tubes, tanks, compressors, and pumps on the 1.5-acre site in La Porte, Texas, uses what is known as the Allam Cycle. Among other differences, it eliminates the steam cycle by replacing water with supercritical carbon dioxide. In this state, achieved under high heat and pressure, carbon dioxide takes on the properties of both a liquid and a gas. The process was primarily developed by British chemical engineer and inventor Rodney Allam, now a partner and chief technologist at 8 Rivers Capital. Net Power is a collaboration between the Durham, N.C.-based technology investment and development firm, plant operator Exelon Generation, and energy construction firm CB&I.

The cycle works like this: the plant operators initially feed pure oxygen, carbon dioxide, and natural gas into a combustor, which ignites the gas. The main by-products from that process are hot water and a lot of supercritical CO₂, which acts as an efficient “working fluid” for driving the adjacent turbine. In turn, the carbon dioxide goes through a series of compressors, pumps, and heat exchangers, all of which help recuperate as much of the heat as possible and return the carbon dioxide to the beginning of the cycle.

“If you keep the entire cycle above the supercritical phase, the efficiencies are amazing,” says Julio Friedmann, chief energy technologist at Lawrence Livermore National Laboratory, who has done extensive research on carbon capture.

Throughout the cycle, varying portions of by-products are removed from the process, ready to sell and ship by pipeline, most notably including carbon dioxide.

Eight Rivers was cofounded by a pair of MIT alumni: Bill Brown, who was previously a managing director at Morgan Stanley, and Miles Palmer, who worked in aerospace technology at SAIC, a massive defense contractor. As Wall Street banks stood on the verge of collapse in 2008, Brown pitched Palmer on setting up 8 Rivers, saying by his recollection: "Why don't we get together and do good for a change?"

They initially focused on developing clean coal technologies, hoping to tap into some of the energy funds in the 2009 federal stimulus package. But they found companies simply wouldn't buy anything that added costs to the process. They were eventually introduced to Allam, who had been thinking about the potential of using supercritical CO₂ to integrate carbon capture into a power plant. He was eventually hired by 8 Rivers and, with other members of its team, he set to work developing the technology necessary to make the process compete with standard, combined cycle natural gas plants.

To truly do so, the company will have to get pretty close to the capital expenditure construction costs of such plants, which stood at $1,056 per kilowatt of capacity in 2014, according to the National Renewable Energy Laboratory. The company expects its first commercial plant to cost around $1,600 per kilowatt, in part due to higher capital expenses, warranties, and other costs associated with a first project of its kind. But they believe they can get costs down to around $1,000 by the time they’ve built five to seven full-scale plants.

Eventually, Net Power expects to produce electricity for around $42 per megawatt-hour, on par with combined cycle natural gas without carbon capture. But on top of all that, the company can also sell several by-products to the market, including carbon dioxide. Taken together, those could effectively push energy production costs down to around $20 per megawatt-hour (theoretically even as low as $9 per megawatt-hour).

Local, state, or federal clean-energy policies—such as carbon taxes, cap and trade systems, and emissions standards—could all improve the economics even further.

Net Power initially intends to act as a licensing company, rather than a developer or operator, selling the technology to utilities, oil and gas companies, and others. The company has already begun conversations and explored potential sites for its first commercial plant, which it hopes will come online as early as 2021.

“There’s always gremlins and you figure them out as you move along,” says Brock Forrest, senior research and development engineer at 8 Rivers. “But from an engineering and technical perspective, we are confident we will be able to show that supercritical CO₂ will be able to generate electricity.”

There are a few additional caveats to consider: the main market for the captured carbon dioxide would be for use in enhanced oil recovery, where energy companies inject it into aging wells to help free up remaining oil. That suggests the captured gas would continue to contribute at least indirectly to the collection and burning of fossil fuels. Crucially, the extraction of natural gas itself carries environmental consequences as well, including leakage of greenhouse gases, contamination of water tables, and earthquakes triggered by subsequent wastewater disposal.

But to the degree that Net Power technology could reduce the use of coal, and prevent the release of untold tons of carbon dioxide from natural gas, it very likely adds up to a net environmental benefit — at least compared to other fossil-fuel power plants.