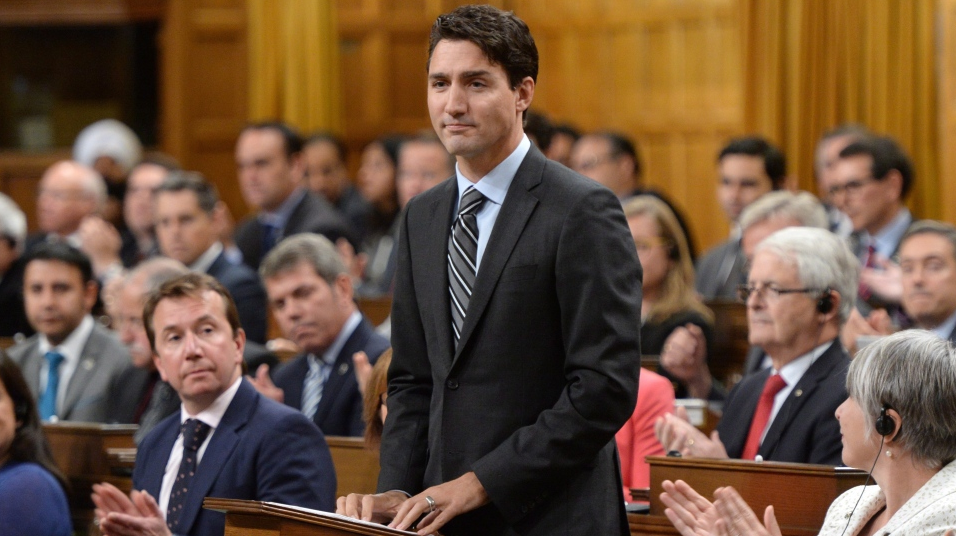 Prime Minister Justin Trudeau announced his government's plan to impose a national carbon price by 2018, rising in the House to lay out the details at the same time his environment minister was meeting with her provincial counterparts.

The federal government wants all provinces and territories to impose a $10 per tonne carbon tax by 2018, Trudeau told the House Monday. And if a province or territory doesn't implement a carbon price on its own, Trudeau said, the government of Canada will implement a price in that jurisdiction.

Each province can choose between a carbon tax or a cap-and-trade system, as well as how to use the revenue generated. British Columbia, for example, provided tax cuts in exchange for its $30 per tonne price.

B.C.'s carbon tax has been in place since 2012. Ontario and Quebec have cap-and-trade systems, and Alberta has also introduced plans for a carbon tax. With those provinces on board, 80 per cent of Canadians live with some kind of carbon pricing.

The plan set out by Trudeau, during a speech calling for Canada to ratify last year's Paris climate agreement, calls for the price to rise by $10 a year until it hits $50 per tonne in 2022.

The timing of the announcement raised a ruckus at the environment ministers' meeting in Montreal, where federal minister Catherine McKenna had gathered with her counterparts to talk about the same subject. For almost a year, the Liberals have talked about coming to an agreement, but McKenna told CTV's Question Period last month that the government would impose a price if they can't reach a deal.

Trudeau said, for any Canadian who lives in an area that experiences extreme weather accompanied by floods, droughts and wildfires, "there is no hiding from climate change. It is real and it is everywhere."

"We cannot undo the last 10 years of inaction," he added. "What we can do is take real effort today and every day to protect the health of our environment and, with it, the health of all Canadians."

Some of those ministers left the meeting with McKenna and expressed shock at the federal announcement.

"We agree that more needs to be done. Nova Scotia's willing to do more, but at this time we need to take this back to our government... We know that this is going to cost Nova Scotians more money and we need to work our way forward."

Saskatchewan Environment Minister Scott Moe said the decision circumvented the work the provinces have done in good faith to come up with a plan.

"We feel it was a betrayal of the collaboration that was indicated all along," Moe said.

Newfoundland and Labrador Environment Minister Perry Trimper said he and his counterparts were railroaded, and that they didn’t see the announcement coming. Trimper said his background is in environmental science and described himself as a friend and a huge fan of McKenna's. He said he had been frustrated with the lack of federal leadership under the Harper government.

"Now suddenly we have that leadership. In the meantime and for that last 10 years, provinces and territories have been making a lot of progress, going down their own paths, coming up with their own strategies. So to have this top down, driven, this-is-how-it's-going-to-be approach, runs counter to what we've all been talking about.

"We're in a bit of a challenge here."

Green Party Leader Elizabeth May praised Trudeau and McKenna for their work at the Paris climate talks, but her tone changed when it came to the Liberals' admission they are sticking to emission reduction targets set under former prime minister Stephen Harper's government.

"With the deepest of regret, how can [Trudeau] reconcile adopting the Paris agreement while accepting the Harper target which will make achieving Paris impossible? These are irreconcilable and incompatible targets," May said.

Conservative environment critic Ed Fast accused the Liberals of ignoring their promise to work collaboratively with the provinces, pointing to complaints from Quebec's environment minister.

"Why is he using a sledgehammer to force the provinces and territories to accept a carbon tax grab?" Fast said.

MPs are expected to vote Wednesday on whether to ratify the Paris agreement.