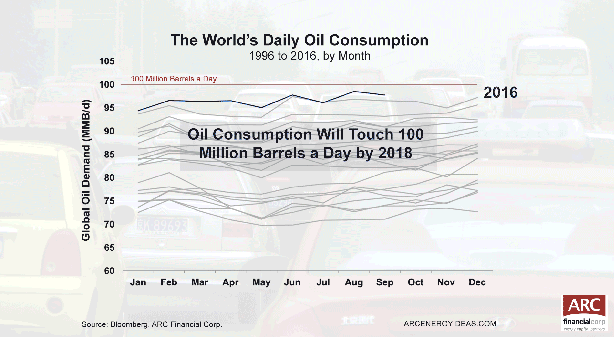 Politicking for the U.S. presidential election is now behind us, so I thought I would write about something that’s more predictable – like oil market demand.

Reflecting on the world’s unquenchable addiction, recent data suggests that the world will soon touch a milestone rate of oil consumption: 100 million barrels every day.

There is a lot of popular talk about using less oil, the end of oil, and other headline grabbing projections of imminent demise. None of these conjectures should be frivolously dismissed in an age of technological change, environmental unsustainability, government intervention and other change agents that can be pulled out of a barrel of unknown-known-unknowns.

But oil is a stubborn tree-climbing animal. Just when you think that you’ve trapped it from rising higher, it gets away on you and keeps climbing.

Speaking of things presidential, think back to when former President George W. Bush spoke of a, “great goal,” in his 2007 State of the Union address. “Let us build on the work we’ve done,” he suggested boldly, “and reduce gasoline usage in the United States by 20 percent in the next 10 years.”

After the former President’s speech U.S. oil demand did go down, but it took a war in the Middle East, an oil price spike, and a global financial crisis to cut American gasoline consumption. In 2012, demand was down by 6.5 per cent relative to 2007.

But since then the animal has gotten away again, deking out conservation and efficiency with the stick of low prices. Bush’s noble, 10-year goal of a 20 per cent reduction was never achieved; this past June U.S. gasoline consumption hit an all-time record high of 9.7 million bpd, well above consumption at the time of Bush’s 2007 speech to Congress.

But growing oil consumption is hardly just Made-in-America issue. This animal is global. The upward trend in oil consumption over the past 20 years doesn’t jibe with any fatalistic oil headlines.

I made a forecast 10 years ago, a year before President Bush’s speech, that the world’s oil consumption would soon rise above a milestone rate of 1,000 barrels a second (or 86,400,000 barrels a day).

Back then my forecast hardly needed a spreadsheet: China was industrializing like a dystopian movie; electric vehicles were an expensive novelty in Popular Science; and carbon policy was a discussion reserved for upscale European salons. The hard-to-fathom rate of burning 1,000 barrels of oil every second was easily exceeded in November of 2007.

There’s only been one period in recent memory when annual, average global oil consumption has actually fallen. That was in the two years following the financial crisis when the world’s economy was momentarily frozen, causing wealth destruction that lingers to this day. The eerie lesson is that in the absence of oil substitutes there is only one sure way of reducing global oil demand: destroy wealth and take money out of everyone’s pocket.

Fast forward to today. This past summer, demand was estimated to approach 98 million bpd (or 1,134 barrels per second), the new record was driven by robust North American summer driving and aggressive pulls from the other side of the world, notably from developing economies like India.

Milestone numbers are important, not because they mean anything physically, but because they make us pause and think. For example, some people are intrigued when their odometer flashes up 100,000 kilometers (I’ve known people who stop on the side of the road and take a photo of their dashboard). Having said that, I doubt anyone will stop their Ford F350 and say, “Gee, I might be the guy who burned the 100 millionth barrel of oil today!”

But we’re headed to the 100-million mark whether you follow powers of 10 or not. Consumption is still accelerating by over one million barrels-per-day-per-year, so it looks like that by 2018, someone, somewhere on the planet, at the end of one hot summer day, will burn the 100-millionth barrel of oil.

History shows that the higher consumption goes, the more it gets into the veins of the global economy, and the harder it is to displace. Yet there are limits to everything. Despite the looming 100-million-a-day milestone, there will come a day of “peak demand,” when the rate of consumption will grow no more. It will happen far earlier than the next power-of-ten milestone.