Leonardo DiCaprio not big on walking his own climate-change talk 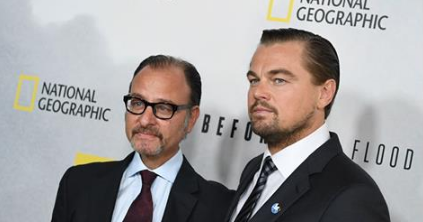 Leonardo DiCaprio is worried, very worried, about the state of the planet.

So the jet-hopping, yacht-loving, multiple-home-owning Hollywood megastar recently took a break from the money-grubbing world of Tinseltown to educate us plebes (you know, those of us who ride the LRT to work, recycle our cans and bottles, and turn down the thermostat at night) on the threat of climate change.

DiCaprio wants us to know that the situation is bad, and getting worse. Which is why he teamed up with the National Geographic Channel and director Fisher Stevens to make Before The Flood, a 95-minute documentary that chronicles the impact rising temperatures are having on our planet, from Greenland to Indonesia.

All share his grave concern about the future of our warming world.

DiCaprio admits his own emissions easily outstrip those of us regular folks. But like so many of the planet’s other eco celebrities — from Al Gore to Bono, James Cameron, David Suzuki, Tom Steyer, and Neil Young — DiCaprio continues to enjoy the big life.

To offset his carbon footprint (and presumably to help ease his conscience), DiCaprio reportedly works with a London-based firm called Future Forests to plant trees in Mexico.

That’s all very nice, and I’m sure DiCaprio is sincere when he makes grand speeches, as he did at last year’s Academy Awards, about the need to address climate change. But while preaching conservation to the masses, he seems disinclined to impose any real sacrifices on himself.

Perhaps that’s why DiCaprio felt it was just fine to rent one of the world’s largest yachts — owned, ironically, by an oil baron from the Middle East — to attend the 2014 World Cup in Brazil.

And maybe that’s why he felt it was okey dokey to take a private jet from Cannes to New York earlier this year — to accept an environmental award, no less — and then promptly fly back to Cannes to continue partying with his friends.

Like many of you, I’d feel guilty if I had to sit for five minutes in an idling car at a Tim Hortons drive-thru, needlessly spewing emissions from my tailpipe. But apparently such ordinary concerns don’t plague big picture thinkers like DiCaprio. Or, for that matter, Prime Minister Justin Trudeau, whose family spent 10 days at a luxurious $2,500 US-a-night resort on the Caribbean island of Nevis last January.

The Trudeau clan’s mode of travel? A government Challenger jet, which reportedly costs about $10,000 per hour to fly and spews more carbon emissions in a single trip than the average Ethiopian, Ecuadorian or Congolese citizen is likely to generate over the course of a lifetime.

I suspect it’s no coincidence that Before The Flood had its September world premiere in Canada at the Toronto International Film Festival, Stevens, the film’s director, told the assembled fanboys and fangirls that he was “really horrified” by the scenes he witnessed in Alberta’s oilsands.

“Look, we all want work, we all need jobs — God knows,” he reportedly told a Toronto newspaper. “And it would be great if it was like: ‘Now, we take all of these people (from the oilsands) and we replant all of that forest.’ Wouldn’t that be amazing?”

Gosh, it sure would. And it would be wonderful if we didn’t need fossil fuels, or petrochemical plants, or airports, or freeways, or the trucking industry, or railways, or ships, or pipelines, or synthetic clothing, or cosmetics, or food preservatives, or the hundreds of other petroleum-based products we use every day.

But we do. We all do. We live in a complex, globally interdependent world that currently consumes about 95 million barrels of oil per day, and is likely to exceed 100 million bpd by 2020.

Despite all the hype over renewable energy and electric-powered vehicles, oil, natural gas and coal continue to dominate the global energy system, and will for many years — if not decades — to come.

Environmental activists have done an incredibly effective job of demonizing the oil industry, and one particular energy source — the oilsands — in particular. And they have been astonishingly effective, with the help of their like-minded political soulmates, at delaying or blocking new oil pipelines in Canada. (As for Russia, Saudi Arabia, Iraq and Iran? Not so much.)

But protesters are extremely selective in choosing their targets, while deliberately avoiding others. When, for example, was the last time you heard about a Greenpeace protest at a metro airport, an auto assembly plant, or at the opening of a new bridge or freeway? Never, I’ll bet.

That’s because the eco-activist crowd wants you to believe in a simple black-and-white world. If only we stop the evil, planet-destroying production of oil, all will be well, and the world will quickly gravitate to renewable sources of energy, with little or no cost to consumers.

This is magical thinking, of course. The kind of thinking that’s popular in Hollywood, where dreamers dream big dreams, and little people like you and me don’t fit into the script.

Gary Lamphier is the Business Columnist for the Edmonton Journal.