Getting to ‘yes’ on pipeline cost up to $300 million 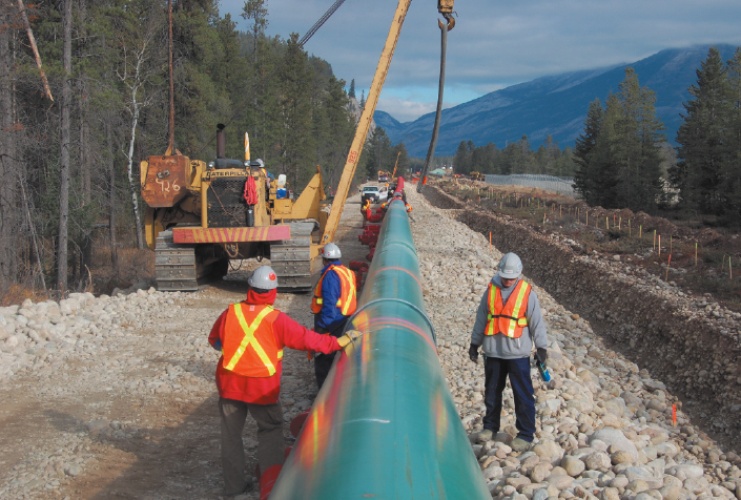 Kinder Morgan expected to spend almost as much next year on Trans Mountain expansion.

Should the $6.8 billion Trans Mountain pipeline expansion proceed around the beginning of 2018, the construction project will generate an estimated $1.15 billion in construction spending, 1,200 jobs at peak construction and $158.7 million in spending by workers – in Vancouver alone – according to the Greater Vancouver Board of Trade.

nd once the expansion is complete, the Conference Board of Canada estimates, each of the 348 additional oil tankers that will move in and out of Vancouver harbour each year will generate $366,000 in spending in Metro Vancouver – a total of $127 million per year.

But before an excavator turns sod on the project, Kinder Morgan Inc. (NYSE:KMI) will already have spent hundreds of millions of dollars just getting the expansion project shovel-ready, according to Conference Board of Canada estimates.

Kinder Morgan won’t release details on its spending to date, although in his presentation to the National Energy Board (NEB), Kinder Morgan Canada president Ian Anderson ballparked the investment at $300 million.

According to Conference Board estimates, Kinder Morgan was expected to have spent roughly $180 million between 2014 and 2016. It has estimated the spending in 2017 to be $273 million.

The company expects it will take another year to meet some of the 157 conditions set out by the NEB before construction begins in earnest in 2018.

Once construction starts, the spending is estimated to be $2.5 billion each year during 2018 and 2019.

In addition to 994 kilometres of new pipeline to be built between Alberta and Burnaby, the company will be investing in new storage facilities in Burnaby, where 20 new storage tanks will be built, and an expansion of the Westridge Marine Terminal, which will be expanded from one to three berths for Aframax oil tankers.

A number of engineering, environmental and geotechnical consulting firms with B.C. divisions have already benefited from spending that the pipeline project has generated just to lay the regulatory groundwork – companies like the consulting firm CH2M and the engineering firm Tetra Tech Inc.

Tetra Tech started work on the design for a new pump station in Kamloops four years ago. There are 12 pump stations along the pipeline corridor, but only one of them is new. The others are existing pump stations that will be upgraded.

Tetra Tech started with a team of six engineers and a dozen support staff. That’s just for one pump station.

“I think we’re up to 50 people working on it,” said Kevin Savage, Tetra Tech’s project manager on the Trans Mountain project. “If you look at our company alone, we could say we average 10 jobs to maybe 15 jobs over the last three years on it.”

CH2M has had a 10-person team working on the preliminary engineering design for the expansion of Trans Mountain terminals in Burnaby and Sumas. It has also employed a number of subcontractors including geotechnical consultants, surveyors, site location services and hydrovac excavation services.

The Vancouver office of Ausenco, a global engineering firm that specializes in the resource sector, has received $1 million worth of work on Trans Mountain as part of the company’s application to the NEB. As part of its work, Ausenco used software developed in Vancouver that analyzes the movement of oil from source to port to optimize efficiencies.

Those are just a few examples of the direct spending from Kinder Morgan just to get NEB approval. There has also been significant indirect investment from related sectors such as the marine industry.

Partly in anticipation of the Trans Mountain expansion going ahead, as well as the Woodfibre LNG project in Squamish, Seaspan invested $75 million in five new tugboats that are used to escort large vessels including oil and liquefied natural gas (LNG) tankers.

“We actually pre-invested,” Seaspan CEO Jonathan Whitworth said. “We had a sense that this, as well as some other projects that were contemplated, would come to fruition, and the port needed these larger escort vessels.”

Seaspan expects to hire 150 mariners over the next five years. Some of those will simply be to replace retiring tugboat operators, but some of the new hires will be driven by the increased need for tugboat escorts for oil and LNG tankers.

Whitworth also expects there will be additional work for tug and barge operators to move construction materials in and out while both the Woodfibre LNG project in Squamish and the Trans Mountain expansion are being built.

Other tug and barge operators in B.C. are likewise expected to see an increase in spending and employment.

Now that the pipeline expansion has been approved by the federal government, Western Canada Marine Response Corp., which is responsible for marine fuel response, plans to invest close to $200 million to build additional bases and add an additional 26 vessels to its fleet of 33. It also plans to add an additional 115 staff.

Once construction on the pipeline and terminal expansion begins, several hundred trades jobs will be created over two years. Kinder Morgan puts the direct capital investment for B.C. at $4 billion.

The expanded pipeline will generate an average of 33,900 jobs and $925 million in spending annually over 20 years, the Conference Board estimates. Alberta will get the lion’s share of the economic benefits. B.C. would get 23.6% of the employment and 12.1% of the fiscal benefits.

Organizations responsible for recruiting and training workers are scrambling to try to ensure there will be enough skilled workers.

The STEM Spotlight Awards, which promote careers in science, technology, engineering and mathematics, have a campaign aimed at persuading high school students and graduates to consider careers in skilled trades.

For the Trans Mountain expansion project alone, the awards organization estimates 450 skilled trades jobs will be generated each year during the construction period for each of five “spreads” of the project. Those jobs include 105 heavy equipment operators, 170 labourers and welder helpers, 44 welders and 50 contract managers (foremen).