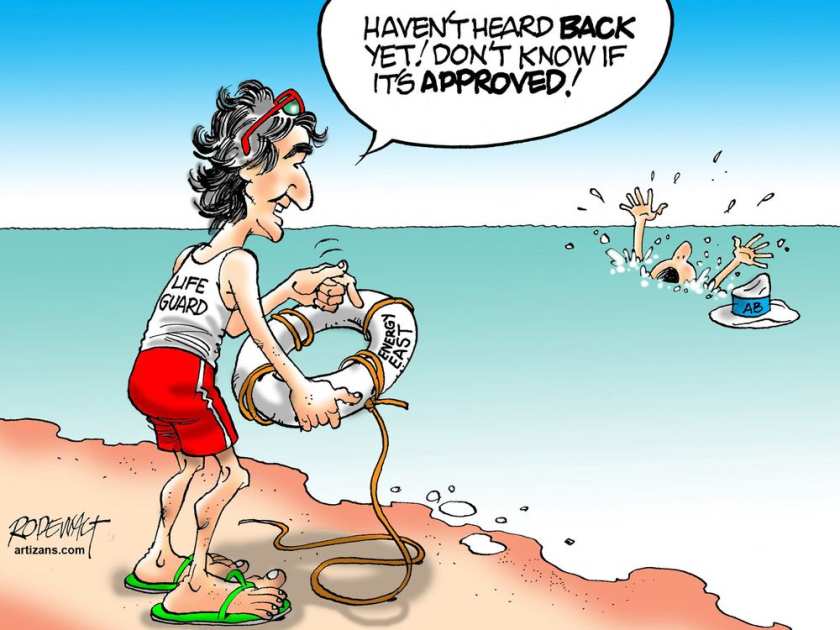 It will be two years or more before we know the fate of the Energy East pipeline, but at least the public hearings have begun into the $15.7-billion project, giving us hope the project will eventually receive the green light to proceed.

It is imperative Canada is able to get its oil to tidewater, where it will fetch the world price instead of being sold at a steep discount to the United States.

It isn’t only western energy producers that will benefit. Speaking at the first of three days of hearings Monday in Saint John, N.B., a spokesman for the Canadian Manufacturers and Exporters said the province is badly in need of the jobs the project would deliver.

“We believe the approval of Energy East will help create new direct and indirect jobs for thousands of unemployed people in New Brunswick … and will generate tax revenue to help us cover health care, education and social services in New Brunswick,” Joel Richardson told the three-member National Energy Board panel.

Richardson said jobless New Brunswickers are returning home from the West due to the downturn in the oil industry, providing a pool of skilled tradespeople in need of work.

Predictably, support for the pipeline isn’t unanimous. The Sierra Club and other groups have expressed concerns about the potential environmental impact of the project, including global warming.

“We do not believe that this is the best thing for the public interest because it entails an investment in fossil fuel infrastructure at a time when all good science tells us that we need to be switching away from these fossil fuel resources as soon as possible,” said the Sierra Club’s Emma Hebb.

Hebb reveals a tremendous amount of naivete. There’s no doubt the world will transition to low-carbon sources of energy, but it’s not going to happen overnight, unless you’re determined to hobble the global economy, which sadly, some environmentalists are.

Many people seem content to welcome tankers from places such as Saudi Arabia to quench the thirst for oil in Eastern Canada. There’s never any qualms about global warming when the product is imported and dropped off at their doorstep, where it provides fuel for all manner of purposes. But the moment it is suggested western supplies could do the same trick — and be a valuable commodity that adds to the nation’s prosperity — projects such as Energy East are shunned.

There will be a need for Canada’s oil for a great many years to come. Energy East is an important part of the solution to getting it to market.