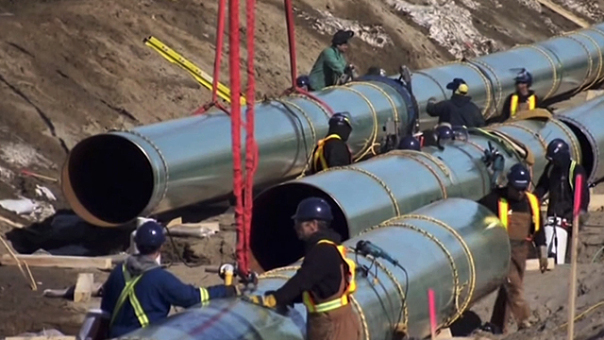 Opposition to the proposed Energy East pipeline may have flared up in Montreal this summer but there was nothing but support for the project in Hamilton, Ont. recently as federal and provincial building trades councils welcomed a high-ranking TransCanada executive and offered uniform approval for the $12-billion project.

TransCanada's Gary Houston, the project's vice-president for Ontario and the Prairies, said Energy East will be a "nice green pipeline" constructed and operated using the strictest safeguards.

The 4,600-kilometre pipeline, to be built over five years, would transport 1.1-million barrels per day from Alberta to New Brunswick, create 14,000 construction jobs, contribute a $55-billion boost to the national GDP and take Canada to the brink of oil self-sufficiency, he told over 300 delegates and guests attending the second-day session of the annual convention of the Provincial Building and Construction Trades Council of Ontario held Oct. 13 and 14.

Houston was preceded on the day's agenda by Robert Blakely, Canadian operating officer of Canada's Building Trades Unions, who was emphatic in his support for the merits of the project and also in castigating Canadian "dupes" who have expressed opposition. Houston was thanked by Patrick Dillon, business manager for the Ontario Building Trades council.

"We are all singing from the same song sheet," Dillon said.

"We are all convinced that we have to move forward on this. We passed a resolution yesterday to put together a third-party advertising mechanism, and funding it, to support Energy East because we know and understand it is difficult sometimes for the owner to be as convincing with the general public as is necessary."

All four of Canada's pipeline proposals are currently stalled, and with Canada's existing stock of pipelines now pumping at capacity — that's four-million barrels a day over 100,000 kilometres of mainline pipes, equal to the sector's daily production. There is little business case for expanding extraction from sources in Alberta, both Houston and Blakely explained.

"That is going to bring another 200,000 barrels of oil a day to market, how are you going to get it to market?" he asked.

"We need an oil pipeline to succeed in this county, and there is absolutely no doubt about which one is in the most significant Canadian interest and that is Energy East," said Blakely. "If Energy East moves 1.1-million barrels of crude oil to the east coast of Canada, to Canaport (the Irving refinery in Saint John, N.B.), it is going to displace the 800,000 barrels of oil we bring in every day from people that don't like us — wonderful vacation spots like Angola and Saudi Arabia and Nigeria." "Irving now puts gas into three out of four cars in New England. We want them to take the market," said Blakely.

Houston directly addressed the construction jobs that would be created by the build.

"To put this in terms you guys might appreciate, we've got 40 pipeline spreads," he said. "A spread provides jobs for between 300 and 600 people depending on the job and conditions."

There would also be 71 pump stations constructed, employing 150 to 200 people each, said Houston, as well as three tank terminals, one marine terminal, 517 valve sites, 49 tanks and three refinery connections.

Nearly half of those construction jobs would be created in Ontario, said Houston.

"This is a big job," he said. "This is the biggest pipeline job since the TransCanada pipeline was built 60 years ago."

National Energy Board (NEB) hearings were scheduled to take 27 months starting this summer, which, if all went well, Houston said, might result in the project obtaining a regulatory permit in 2018 and start of construction in 2019. But hearings in Montreal in August were disrupted by protesters and then the NEB announced it would replace the hearing panel due to an apparent conflict of interest among some members.

"We are stuck," Houston said.

"We are waiting for the federal government to appoint a new panel and we are anxious to get back at it."

Protesters have raised safety and environmental issues and the rights of indigenous people, among other concerns, but Blakely said they have their facts wrong.

"Don't anyone mistake this, we are not climate change troglodytes," he said. "We live here, so do our children. We are not going to wreck the joint for a couple of lousy paycheques.

Dillon said he had been exchanging letters with a member of parliament from northern Ontario who has expressed concerns about possible fouling of drinking water by spilled oil.

"We wrote a letter back just in the past week expressing that our members live along that pipeline right from Alberta to New Brunswick and we drink the water from the river that he is talking about," said Dillon.

"We actually understand that we can build a pipeline because we build it ourselves and we can build it in a way that is safe, and it's the safest way that you can transport oil across the country."