Blowing Hot Air on the Wrong Target? A Critique of the Fossil Fuel Divestment Movement in Higher Education 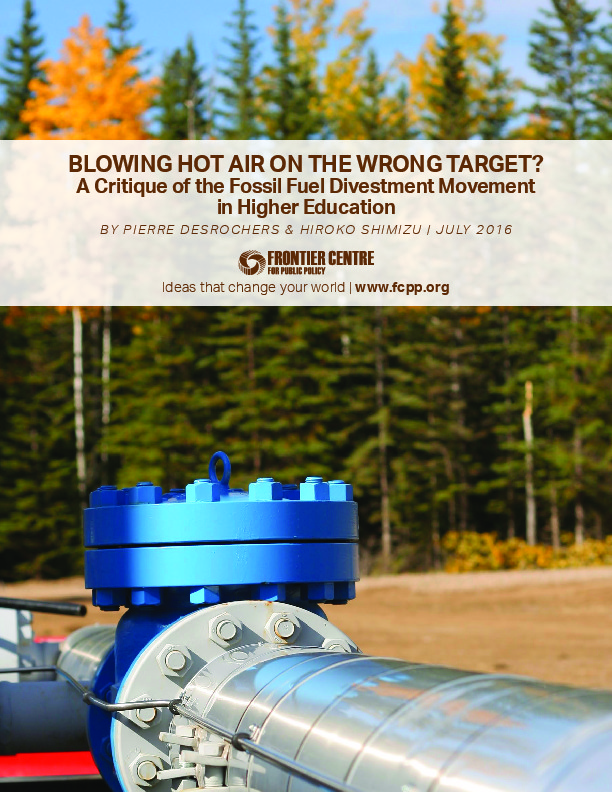 By 2015, students and faculty at more than 1,000 college and university campuses across the world (including nearly 30 in Canada) had pressured academic trustees and administrators to divest their institutions’ endowment holdings in publicly held fossil fuel companies (i.e., to sell or part way with stocks and other funds invested in corporations engaged in the extraction of coal, crude oil, bitumen (oil sands) and natural gas).

Invoking computer-generated catastrophic climate change scenarios, they insist that most economically recoverable carbon fuel reserves be left in the ground. The divestment activists’ rhetoric and policy prescriptions, however, are morally questionable because they imply no sacrifices on the part of consumers and will hurt primarily poor people, futile because achieving their goals will have no impact on the value of corporate stocks and the production of carbon fuels, and misguided because drastically curtailing their use in the absence of better alternatives will harm both human society and the environment.

First, divestment activists claim the moral high ground by equating fossil fuel divestment with past campaigns against tobacco, arms, apartheid-era South Africa and even slavery. Unlike their predecessors, however, anti-carbon-fuel activists are in no apparent hurry to divest themselves of the countless products derived from the object of their scorn and typically do not even suggest that affluent Westerners cut back on their consumption so that poor people in less advanced economies could boost (if only a little) their energy use on a per capita basis. The activist’s sole focus on corporations also conveniently omit the fact that most of the CO2 emissions associated with carbon fuels come from the combustion rather than the production stage. For instance, in the case of most liquid fuels, tailpipe exhaust accounts for between 70 per cent to 80 per cent of all greenhouse gas emissions, with the remaining portion traced back to upstream production, refining and distribution. Furthermore, assuming that divestment activists succeed in making carbon fuel energy more expensive and/or scarce, the main victims will be people of lesser means throughout the globe.

Second, university endowments are minor financial players with insignificant resources invested in energy stocks. As long as financial returns remain attractive, politically motivated divestment actions amount to making a tiny fraction of a drop in an oil barrel available at discounted prices to other buyers. Even assuming that divestment campaigners could somehow lower stock prices, this would have no impact on a corporation’s bottom line or its ability to raise capital for promising projects. Furthermore, if divestment campaigners were able to revoke the social licence of publicly traded carbon energy producers in a context where the demand for their products remained high, the main beneficiaries would be nationalized producers in countries such as Venezuela, Saudi Arabia, Iran and Russia whose environmental and social records are much more problematic.

Third, divestment manifestos are silent on the economic, social and environmental benefits of carbon fuels and petrochemical products for which there are currently no better substitutes. For instance, carbon fuels made possible large-scale, reliable and affordable long-distance transportation which paved the way to improved overall nutrition (by concentrating food production in the most suitable locations thus making food more plentiful, diverse and affordable), the eradication of famines (by moving the surplus of regions with good harvests to those that had experienced mediocre ones), wealth creation (by facilitating the migration of large number of people away from the countryside and into cities), and advances in modern medicine (by allowing more people to devote themselves to medical research and the development of a wide range of new and better medical products). As a direct result of greater use of carbon fuels, in the last two centuries every indicator of human well-being, from overall number, life expectancy, income per capita, hunger and infant mortality to child labour  and education, has improved, very often dramatically. Increased usage of carbon fuels and feedstock was also directly responsible for environmental and public health benefits ranging from improved air and water quality and sanitation to reforestation. For instance, kerosene, propane and heavy oil displaced poor quality biomass fuels such as firewood and dung that filled houses with soot, particles, carbon monoxide and toxic chemicals (and still kill millions of people today who cannot afford carbon fuels or electricity). Humanity’s increased reliance on resources extracted from below the Earth’s surface helped preserve and promote life forms on the surface. A case in point is the relatively recent large-scale reforestation of all advanced economies and of some developing economies (e.g., China, India, Bangladesh and Vietnam) that can be traced back to carbon fuels-driven advances such as drastically increased agricultural yields that made much marginal agricultural uneconomical and available for spontaneous reforestation (in most cases) and tree plantations (in a few selected locations), the replacement of work animals such as horses and mules by tractors and other machinery, and the substitution of agricultural products such as plants grown to produce fibres, dyes and rubber to animals raised primarily for their wool and fur by synthetic products.

As it currently stands, the fossil fuel divestment campaign is an exercise in futility that even if successful would have no impact on greenhouse gas emissions, climate change or the financial standing of carbon energy producers. What its overall demonization of conventional energy would achieve if it was echoed by policy-makers, however, is a hefty price for the middle class in terms of both lost jobs and more expensive energy bills, a less reliable electric grid, and additional significant environmental problems in advanced economies. It would mean energy poverty among people of lesser means, as well as lost development opportunities and much greater levels of disease, death and environmental degradation in poor countries.