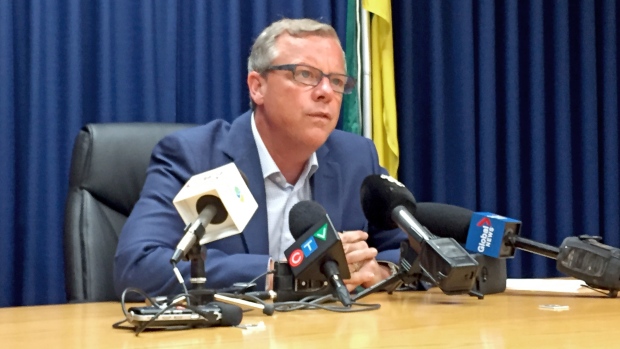 The premier, speaking to media in Saskatoon on Friday, said he’s worried the federal government will propose a national carbon tax before October’s premiers’ meeting.

“We’ve been hearing rumours that the government is moving ahead unilaterally with a carbon tax, or a big price on carbon,” he said. “When we raise this, when we’ve confronted our federal friends on the issue, they’re not refuting that this is possibly in the works.”

Wall has spoken several times in the past on carbon tax — which is a tax or charge on emissions. He said in February he would not be signing any agreement with the federal government that includes a national carbon tax, and though he changed his tone in April to say a carbon tax was possible in the future, he told CTV News last month he was concerned with suggestions the Canadian government will introduce carbon pricing with or without agreement from the province.

He said Friday he wants to see the federal government work with the premiers on the issue, but reiterated he thinks the best way to tackle climate change is to invest in emissions-reducing technology. A carbon tax would hurt Saskatchewan, especially while oil prices are down, he said.

“The message from Saskatchewan will be unchanged, and that is, ‘Now is not the time for that,’ ” he stated.

The province plans to soon release a report on climate change, according to the premier.

“You’ll see us present a white paper on climate change because we want to have a strong policy in the province to fight climate change. Our position will be that focusing on taxes is probably not the best way to do it — especially if it poses a risk to our economy, to jobs in Saskatchewan.”

Canada's most populous provinces have already introduced or are preparing to introduce carbon pricing, whether through a carbon tax or cap-and-trade program.

The federal government had not responded as of Friday evening to Wall’s most recent comments, but last month Prime Minister Justin Trudeau suggested Canada will introduce carbon pricing across the country, regardless of provincial agreement.