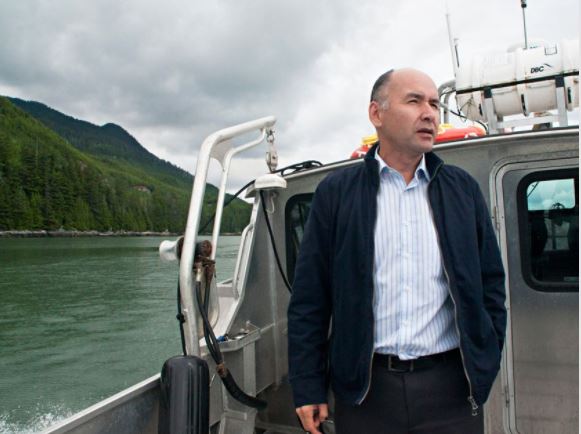 While opponents steal the limelight, scores of pro-development First Nations groups worry they'll lose once-in-a-lifetime opportunities that could lift people out of poverty.

The former chief counsellor of the Haisla Nation near Kitimat has laboured for more than 13 years to improve Indigenous lives through economic self-sufficiency — it’s how he says he measures success — and now it could all come crashing down because of what he believes are misguided government actions that burden those projects with unnecessary costs.

“We were right on the cusp of First Nations in my region being able to look after themselves,” said Ross, who ran and won a Liberal seat in the provincial legislature last May to help get the liquefied natural gas (LNG) industry off the ground.

“We were just starting to turn the tide on that opposition to everything. For the first time, since white contact, we were ready to take our place in B.C. and Canada. Instead, B.C. is not going to exist pretty soon in terms of investment. That is how worried I am.”

Those groups have signed benefits agreements involving cash, jobs and business prospects with projects such as Pacific NorthWest LNG, Trans Mountain’s pipeline expansion, Eagle Spirit Energy Holdings Ltd.’s upgraded oil pipeline, as well as others that have been spiked or delayed by various governments.

Ross said governments in Victoria and Ottawa in particular are “competing to get rid of industry” rather than competing to attract industry, like the United States aggressively does, echoing the experiences of Indigenous leaders in other regions, where environmental activism has crushed the fur trade, seal hunt and natural resource extraction and left behind poverty, isolation and resentment.

“The more sickening thing for me is that these people who oppose development in Canada truly believe they win when they defeat a project,” Ross said. “Actually, you don’t win. It’s just that the United States buys the Canadian product at a discount and sells it on the international market.”

Calvin Helin, a lawyer, author, Indigenous thought leader with 1.7 million Twitter followers, and the chairman of the Eagle Spirit project that is fighting Ottawa’s proposed tanker moratorium, said there is rising disillusionment with green activists among Indigenous communities.

The general agendas of Indigenous communities and environmental NGOs sometimes overlap, he writes in his soon-to-be published book, Dances with Development, his fifth.

But Big Green measures its success by stopping things, which results in media exposure and increased opportunities for financial contributions, while Indigenous governments — who represent people with a 13,000-year-plus track record of protecting the environment — get re-elected based on whether they deliver “tangible holistic community wellness through balanced development” in their communities.

“These environmentalists are happy to make a park in somebody else’s backyard,” Helin said. “Well, screw that. You are talking about people where there is 90 per cent unemployment.”

For example, if the Petronas-led Pacific NorthWest LNG project had proceeded to construction, the Lax Kw’alaams Band, one of the largest Indigenous groups in B.C., could also have become one of Canada’s wealthiest.

Instead, it’s counting its opportunity losses because Petronas shut everything down this summer after years of regulatory delays and clashes with opponents. The band had negotiated an agreement that involved more than $2 billion in cash, benefits and jobs over the $36-billion project’s 40-year time span, Mayor John Helin said.

The band, based in the Prince Rupert area, was initially opposed to the project, because of its impact on the environmentally sensitive Flora bank, a critical salmon habitat, and rejected a benefits offer worth more than $1 billion.

But the community reversed its opposition after Petronas agreed to re-locate its facilities and negotiate a new deal.

In the end, Petronas cancelled the project because of “the extremely challenging environment brought about by the prolonged depressed prices” for LNG.

Yet the company was just as concerned by protesters camped on Lelu Island, where the project was to be sited, who made it difficult to do preliminary work, as well as ongoing litigation funded by SkeenaWild Conservation Trust.

Helin said a minority of band members were against the project and aligned themselves with SkeenaWild, which receives funding from U.S. interests such as the Gordon and Betty Moore Foundation. SkeenaWild was also one of the major opponents of the Northern Gateway pipeline.

It started “dividing people with bad information or the wrong information and then if you don’t get your side of the story out, they run with it and they are noisy and that is what governments listen to,” Helin said.

The Lax Kw’alaams are now looking for another LNG project to set up on its traditional lands, but nothing is on the horizon, he said. The Aurora LNG project near Prince Rupert, led by CNOOC Ltd., was also cancelled this summer.

Karen Ogen-Toews, past chief of the Wet’suwet’en First Nation, said the collapse of Pacific NorthWest LNG was a wake-up call for the First Nations LNG Alliance, which she leads and which represents six groups, primarily in northern B.C., that signed benefits agreements.

She said up to 50 First Nations in the province’s north could benefit if the LNG industry moves ahead and most are supportive.

“It was a no-brainer for our nation to say yes,” said Ogen-Toews, a social worker who discovered Canada’s energy potential and its benefits for First Nations by reading such books as Triple Crown, written by Jim Prentice, the former Alberta premier who died a year ago.

“As long as we make sure that all of our cultural sites are being protected and all of our berry picking sites are protected, what other industry do we have? We could maintain the status quo, or do something to get our people out of poverty.”

Ogen-Toews said governments that are supposed to create the right conditions are “dilly dallying” while U.S. competitors are already shipping LNG overseas.

The loss of so many energy projects has soured First Nations’ views of environmentalists, who are creating the impression that there is more Aboriginal opposition than there actually is, she said.

“The opposition people figured that they won — that is one down, how many more to go?” Ogen-Toews said. “I don’t think that a lot of people see the big picture of how LNG helps the economic wheels of B.C. and Canada turn.”

There’s also no love lost between the Eagle Spirit pipeline project, backed by 30 First Nations and the Aquilini Investment Group based in Vancouver, and the environmentalists and governments opposed to Alberta oil being piped through northern B.C. so that it can be shipped by tanker to Asian markets.

The project, which emerged in response to opposition to the Northern Gateway pipeline and involved years of consultations with First Nations from Bruderheim, Alta, to Prince Rupert, has a state-of-the-art environmental protection plan for land and ocean. It also comes with a pre-approved energy corridor where pipelines and related infrastructure can be fast-tracked through traditional lands.

Led by Calvin Helin, a member of the Lax Kw’alaams and the brother of John Helin, the project is fighting Prime Minister Justin Trudeau’s proposed tanker moratorium for the northern B.C. coast, which was announced last year at the same time the Northern Gateway project was killed.

Helin said chiefs with unextinguished title over the territory had never heard of such a forest and bitterly oppose the idea.

“What these trust fund babies are basically doing is parachuting into traditional territories whose people have looked after the environment for thousands of years.”

Helin, who recently made a presentation to the standing House committee in opposition to Bill C-48: Oil Tanker Moratorium Act, introduced in May, said his group will fight it in the courts if it becomes law because it was implemented without proper consultation.

“We spent four years developing a model that would protect the land and the ocean and the First Nations are the ones that vetted it and believe that we can do it and they want to proceed,” he said. “We will never get a chance to do this again; it’s so difficult.”

Chief Isaac Laboucan-Avirom, of the Woodland Cree First Nation in northeastern Alberta, hopes the Eagle Spirit project is given a chance.

“If we have the ability to prove ourselves, we could show the country and the world how to do things collaboratively and coexistently,” he said.

Laboucan-Avirom’s band, which is surrounded by oil and gas development, supports energy projects that benefit First Nations communities over the long term. Otherwise, “I am just administering poverty,” despite sitting on some of the world’s richest oil and gas deposits, he said. “I want the ability to share the wealth that has been taken out of our territories for the last one hundred years.”

Politician Ellis Ross also supports Kinder Morgan Canada Inc.’s Trans Mountain pipeline expansion, which the new NDP B.C. government is fighting in the courts, and the completion of the Site C dam, whose construction was suspended because of opposition.

Alberta Premier Rachel Notley, worried about the legal challenges with the Trans Mountain project, is starting a cross-country tour next week to talk about its benefits.

The project’s loss would also hurt more than 40 First Nations that signed benefits agreements with Kinder Morgan, including the Tk’emlups te Secwepemc First Nation near Kamloops.

As Haisla chief, Ross took a stand against the Northern Gateway pipeline, the first of the big energy projects proposed in the province in recent years, because it didn’t have enough to offer First Nations and there were too many environmental risks.

But he supported the LNG projects proposed for his region — Royal Dutch Shell PLC-led LNG Canada and Chevron Corp.-led Kitimat LNG — because they came with ownership opportunities and business development.

For a brief period, Ross was in an unequalled position of power to make LNG successful. After winning the Skeena riding, previously an NDP stronghold, he served as cabinet minister responsible for natural gas development — the first Indigenous politician to become a B.C. cabinet minister.

He believes LNG projects in his region are at high risk of never being built because of provincial and federal government obstacles that he said will make them even more uncompetitive than they already are.

Those obstacles include rising carbon taxes, reviews of fracking used to produce the gas, a clampdown on methane emissions, and even import duties on steel used in components from Asia.

Ross’s fears were confirmed by the Paris-based International Energy Agency this week, which in its annual world energy outlook predicted Canada’s LNG exports would not come until the 2030s — a decade longer than expected — while U.S. competitors ramp up their own exports.

The delay is occurring even though resource companies have improved their relationship with First Nations by involving them early to discuss their aspirations and get them involved, said Susannah Pierce, external affairs director at Shell’s LNG Canada.

“In my experience, in particular with LNG, we have seen overwhelming support that I personally have never experienced in my career of developing energy projects and part of it has to do in how you involve the First Nations,” she said.

But Pierce acknowledged that projects actively trying to get permitted or financed could slip away “if we do not seize the moment today to try and assure these projects go forward.”

If they do slip away, Ross said the Haisla will remain dependent on government handouts. “Basically, they lose the future,” he said.